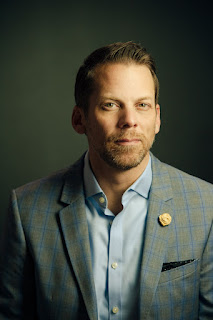 Abel Harding is a 7th generation Floridian with a deep love for the Sunshine State and its people. Raised in rural North Central Florida, he moved to Jacksonville in the mid-1990's. A long-time banker, he serves as the area president for a regional bank.

In addition to his 25-year banking career, Harding has a life-long affinity for writing. He began with essays and letters to the editor in high school and later founded JaxPoliticsOnline, a blog focused on politics in Northeast Florida. The blog broke numerous stories and was named “best local politics blog” by Folio Weekly. In 2009, Harding left banking to join the  Florida Times-Union, the state's oldest daily newspaper, as its business and politics columnist.

While with the Times-Union, Harding began the widely-acclaimed "Florida Morning" blog that was the first-of-its-kind daily digest of Florida politics. He received numerous awards during his journalism career, including Sunshine State Awards from the Society for Professional Journalists for "Broken Trust" and "Secret Agent." During his tenure with the Times-Union, Harding served as a political commentator for First Coast News, the Jacksonville affiliates of ABC and NBC, and WJCT Radio, the local NPR affiliate.

Harding left the Times-Union to serve as the director of communications for the City of Jacksonville and as a special advisor to the mayor. After leaving city government, Harding re-joined the banking industry in the fall of 2011.
Harding has served in leadership capacities for a number of local nonprofit organizations and government agencies, including the Jacksonville Planning Commission, the Cultural Council of Greater Jacksonville, One Spark, JAX Chamber, and Operation New Hope. He currently serves on the board of  the Jacksonville Transportation Authority, the state agency responsible for public transportation in the Jacksonville region. He also serves as a trustee of WJCT Public Media, the local affiliate of PBS and NPR, and as a board member for the Jacksonville Humane Society. He is in his last year as chairman of JAX BIZ, the political action committee of JAX Chamber.

Popular posts from this blog

This front-page story appeared in the Florida Times-Union on Sunday, July 25, 2010. It was the recipient of a Sunshine State Award in 2011 by the Society of Professional Journalists' South Florida chapter for Enterprise Business Reporting. When Kenneth Wayne McLeod held a gun to his head and ended his life, it left a single bullet hole in the driver's side window of his Hummer. The dark tint of the black sport utility vehicle's window held the shattered glass together. The film was like the lies the 48-year-old Jacksonville financial adviser hid behind for years, a slick facade that kept investors in his fraudulent bond fund unaware until a convergence of forces pushed the truth from the shadows. Since his June suicide, his family and many of his closest associates have declined offers to talk about his life. But interviews with dozens of others and public records revealed a lot about the man behind a Ponzi scheme of at least $34 million. They depict a man w
Post a Comment
Read more

This front-page story appeared in the Florida Times-Union on March 27, 2011. It was awarded a Sunshine State Award by the Society of Professional Journalists' South Florida chapter in June 2011. Not a soul reports for work at the shell of a car dealership along Interstate 95, the cornerstone of a massive project that aimed to create more than 600 jobs. Same goes for the empty building slated for LaVilla Bistro on the outskirts of downtown. The parking lot at Union and Beaver streets is now dotted with a mound of dirt and piles of bricks - not cars belonging to hungry customers and 100 employees. The unfinished projects are glaring examples of costly meltdowns marring the $25 million Northwest Jacksonville Economic Development Trust Fund. The fund, aimed at sparking private investment in a long-neglected part of town, helped win African-American support for Mayor John Delaney's far-reaching $2.2 billion Better Jacksonville Plan in 2000. Read more here .
Post a Comment
Read more